The Lost Painting in the Empress’ Bedroom in the Winter Palace

Grand Duchess Marie, the daughter of Alexander II and Empress Marie, was with her mother in the Winter Palace in April 1880.


On April 8th, she wrote “… Missy’s [Princess Marie of Edinburgh] picture reached us quite safely, except that the frame was broken. Mama had it always on her bed or on a chair in front of her sofa …” Missy’s portrait was a gift from Queen Victoria to the Empress Marie. [Diana Mandache ‘Dearest Missy’] 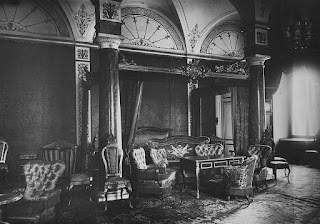 Two years later, another portrait of Princess Marie of Edinburgh was commissioned.

Beatrix Potter wrote in her journal on Sunday, February 5th, 1882 “… Mr. [John] Millais is going to paint the portrait of one of the Duchess of Edinburgh’s children. The duchess is staying with Princess Mary, Kensington Palace. Mr. Millais went to see her yesterday, doubtless very shy. She offended him greatly. She enquired where his ‘rooms’ were, evidently doubtful whether a Princess might condescend to come to them. ‘My rooms m’am are in Palace Gate’ … He says she speaks English without the slightest accent, the Russians are wonderful at languages…


Saw the Duchess’ little girl come out of Mr. Millais’ about quarter past twelve – brown bonnet, sealskin jacket, long yellow hair to the waist. Mr. Millais got a matting and an extra butler for the occasion, he’s telling them, see what his rooms are like! …”


Millais exhibited ‘H.R.H. The Princess Marie’ (below) at the Summer Exhibition in the Royal Academy of Arts in June 1882. 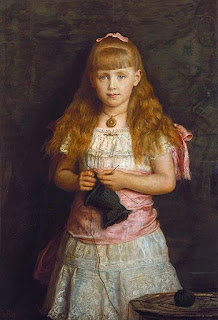 The portrait given by Queen Victoria to Empress Marie has been lost. There are no photographs and the artist is unknown. In the 1920 inventory of the historical rooms of the Winter Palace, the paintings listed in Empress Marie’s bedroom are ‘The Virgin’, ‘Madeleine’, ‘Angel of Prayer’ and ‘ Holy Alexander Nevsky’. 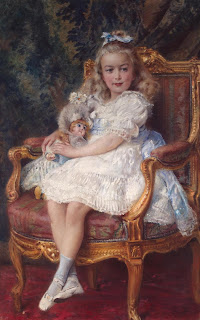 Although the portrait (above) has been identified as Grand Duchess Marie by K. Makovsky in 1905, is it the lost portrait of Marie of Edinburgh? There is no signature visible. In the turmoil after 1917, had it been labeled Marie, unsold during the 1920s-1930s, and then transferred to a museum until acquired by the Hermitage in 1946?

Posted by Winter Palace Research at 15:10