On Wednesday January 5th 1900 Nicholas II left ‘at 10:15 with the entire family to the Warsaw Terminal to meet Uncle Alfred [Duke of Edinburgh and Saxe-Coburg], Sandra [Alfred’s daughter] and her husband Erni Hohenlohe. We took them to the Winter Palace’.


A series of photographs were taken by Alexandra, Sandra and Erni in the emperor and empress' rooms on the 2nd floor of the Winter Palace, two of which were in his Private Study (below). 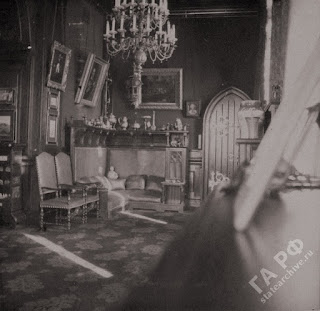 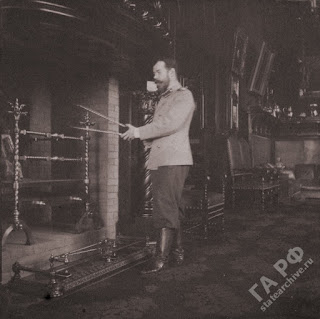 An unattributed photograph (below) has been misidentified as the Alexander Palace. It is the Private Study (181) in the Winter Palace. [Note the exact placement of objects as shown in the above photos] 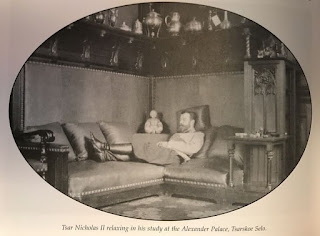 Where did the author find this rare photo? Although it was not included in the series of photographs from Nicholas’ 1899-1900 album released by the GARF Archives a few years ago, it may have been from the Hohenlohe’s albums.


Another possibility of a later date for the photo is if it came from the albums of Grand Duke Ernest of Hesse-Darmstadt. After Nicholas had recovered from typhus in the fall of 1900, they left Livadia on Wednesday January 10th 1901. Transferring from the yacht to the train, Nicholas and Alexandra in the evening were informed of the death of Queen Victoria.  On the way to St. Petersburg, they picked up Ernest and his wife Ducky, Sergei and Ella. In the Winter Palace, the Hesse couple with their daughter lived on the 3rd floor above the rooms of the emperor and empress. On Tuesday the 16th Ernest and Grand Duke Mikhail left for the Queen’s funeral in London. A week after returning to the Winter Palace, they went for the day to Tsarskoe Selo on Friday February 1st. ‘We showed the entire Alexander Palace to Erni and Ducky’. 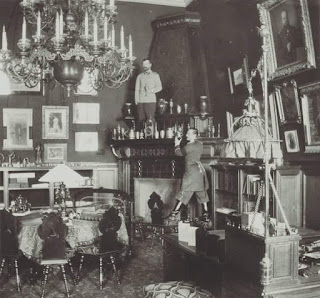 The two photographs (below) of Nicholas in his bathroom in the Alexander Palace are part of GARF’s current release. They are unusual due to the missing objects, with the painting still to be hung, and may have been taken in 1907. On Wednesday February 14th ‘during the night the tiles in my bathtub cracked’. Was Nicholas inspecting the repair work?

Do you see the electric bell-push on the bathtub with the wire hanging over? It may be a Fabergé. 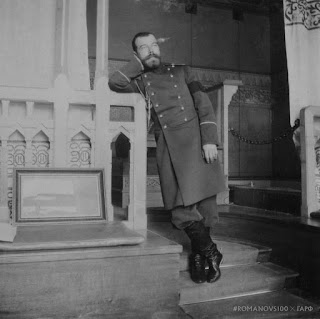 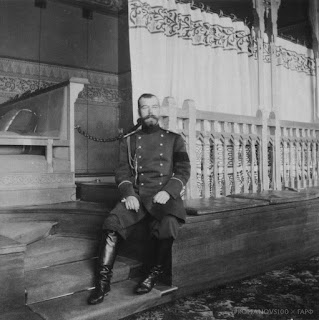 Posted by Winter Palace Research at 06:39