Lost Portrait of Queen Victoria’s Granddaughters, the Princesses of Coburg

The four daughters of Alfred Duke of Edinburgh and Saxe-Coburg-Gotha and Grand Duchess Maria Alexandrovna were painted c1893 by the German artist Friedrich August von Kaulbach (below). 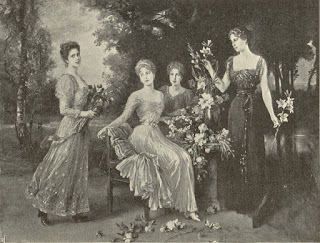 Princesses Beatrice (Infanta of Spain), Marie (Queen of Romania), Alexandra (Princess of Hohenlohe-Langenburg) and Victoria Melita (Duchess of Hesse-Darmstadt and Grand Duchess of Russia)
After their marriage in 1874 and as heir to the duchy, Alfred and Maria lived both in England and the Edinburgh Palais in Coburg. After the death of the duke in 1900 Grand Duchess Maria remained in Coburg until her death in 1920.


A painting of the four daughters hung in the Drawing Room of the Palais although unknown if it was the lost Kaulbach portrait. Where is it now?


Photograph (below) of the Edinburgh Palais in Coburg 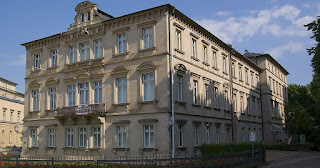 Nicholas II and Empress Alexandra spent the first day in their newly reconstructed apartment on the 2nd floor of the Winter Palace on Saturday December 30th 1895. His bathroom (961) was located next to the Gothic Library. That evening the emperor wrote that ‘with delight I took a bath in my marvelous swimming pool-tub’.


Photograph c1930s (below) of the Bathroom’s marble pool-tub 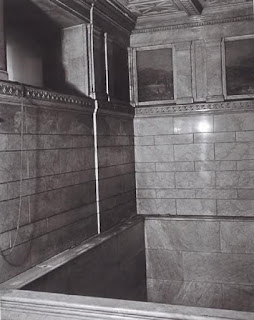 Two days later on Monday January 1st he noted they ‘got up early. I splashed around with delight in my pool-size bathtub and after coffee I sat down to unbearable telegrams’. 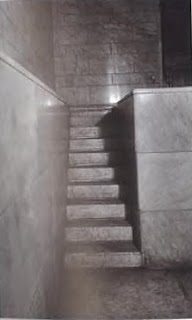 Posted by Winter Palace Research at 09:59 No comments: