After the fire in 1837, Nicholas I ordered the architects to recreate the Winter Palace as it had been. He was aware that parts needed to be altered to adapt to the changes in the Imperial Family.

Nicholas had been influenced by his wife in the 1820s-30s with Berlin’s architecture; the most famous being Karl Schinkel. He incorporated some of the elegant classicism and gothic designs when rebuilding the Winter Palace. By the 1850s, the Schinkel style was abandoned for a mix of elaborate and ornate designs.

In the late 1800s, the Polish writer Boleslaw Prus was impressed with Imperial Berlin but soon wrote “… I long to see something small and simple …”

A classic example of the style change in the mid 1800s was Empress Marie Alexandrovna’s boudoir in the Winter Palace. The former rooms of Empress Marie Fedorovna were remodeled in 1840 for the wife of Alexander II.

The boudoir was designed by A. Briullov with light patterns of blue and gold and with furniture by Gambs.

Hau’s watercolor (below) of the Boudoir in the 1840s 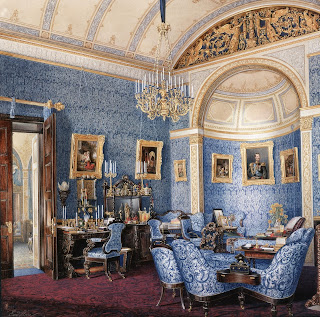 I have a photograph of the boudoir in 1850 showing the furniture placed further apart along the walls for ease of movement.

In 1853, the architect H. Bosse redecorated the boudoir in the style of the Second Rococo.

Hau’s watercolor (below) of the boudoir in 1861 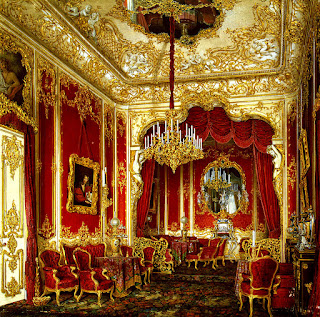 On the wall in the above watercolor is Domenichino’s beautiful painting of St John the Evangelist. 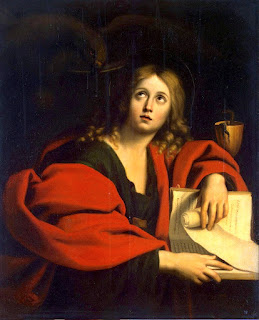 It is mystifying why Empress Marie preferred to surround herself with this opulent and oppressive red and gold rather than her blue cozy retreat.

In 1868 a draft plan was completed to redecorate the boudoir in blue but was never implemented.

The boudoir today (below) has been elegantly restored by the Hermitage, retaining the white marble fireplace and caryatids. 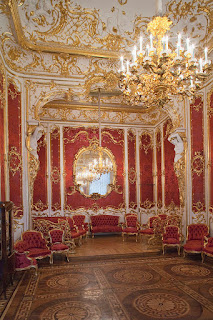 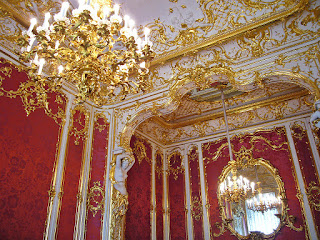