The Footsteps of Prince Albert in Italy

In October 1837, Prince Albert of Saxe-Coburg und Gotha wrote to his father Ernest I from Italy “… Milan, and still more, heavenly Venice contain treasures of art that astonish me …”

After arriving home in Coburg, Albert sent Queen Victoria a small album of scenes he had drawn on the journey. Victoria wrote “… I fear now I shall never do so [travel to Italy] …”

On December 29th, 1839 Albert arrived in ‘the far-famed Florence’. On February 25th, 1839 he wrote to his friend Lowenstein “… Oh! Florence, where I have been for two months, has gathered to herself noble treasures of art. I am quite often intoxicated with delight when I come out of one of the galleries …”

A half-century later in the spring of 1893, Queen Victoria did visit Florence. I was not aware of the visit until reading Petra Kleinpenning’s new book ‘Grand Duke Ernst Ludwig and Princess Alix of Hesse and by Rhine in Italy – 1893’ [www.amazon.co.uk] 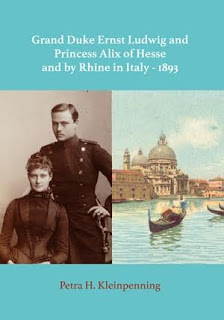 Petra has written a fascinating ‘day-to-day summary’ of their stay in Florence from Friday April 14th to Thursday April 27th, visiting their grandmother Queen Victoria at her Villa Palmieri while they stayed at the Hotel de la Ville and then leaving for Venice.

Prince Albert’s favorite building in Florence was the Palazzo Pitti, the ‘beauty of the external architecture and the magnificence of the apartments’. It was also a favorite for Ernest and Alix, visiting the Palazzo three times during their busy two week stay.

Photograph (below) of the Palazzo Pitti c1875 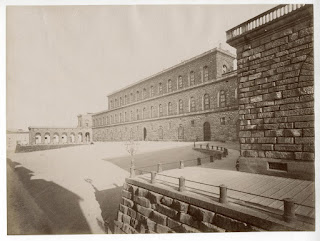 I am curious if Queen Victoria remembered and visited Casa Cerini or had time abated her obsession of all relating to Albert.

Prince Albert and his granddaughter Alix never returned to Italy but both were inspired by the architecture: Albert and Osborne, Alix and Livadia.


In her book, Petra reveals that Alix bought two frames for her friend Toni Becker. There is no documentation for other purchases but I wonder if the two paintings next to the fireplace in her study in the Winter Palace were brought from Italy. In the picture below there are 2 photographs, one is of an Italian style garden and the other is of the Madonna. Can anyone identify the artists? 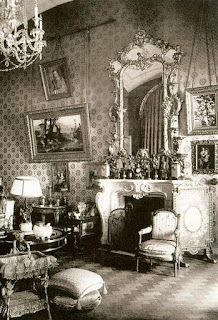 Posted by Winter Palace Research at 06:54