In February during the last week of Maslenitsa (Pancake) before the Great Fast begins on Monday, traditional carnival festivities with ice slides and folk booths were held  on the Admiralty Square side of the Winter Palace.

Lithograph (below) of Charlemagne’s 1850 painting of Admiralty Square 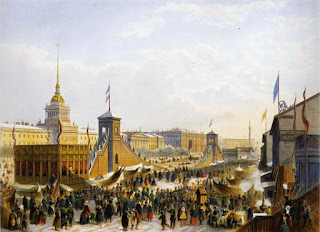 Large crowd with the Grand Dukes incognito walked around and beneath the long icy slides and surrounding booths. A contemporary wrote ‘people normally walk in the mountains but on Shrovetide walk under the mountains’.

Watercolor from the Album of M. Taglioni in 1837 of Admiralty Square (below) 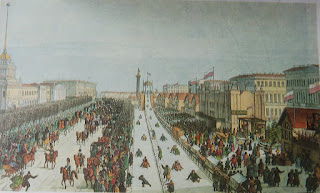 K.E. Makovsky’s 1869 painting (below) of the booths by the Winter Palace 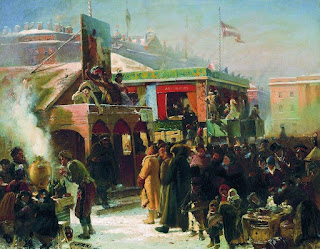 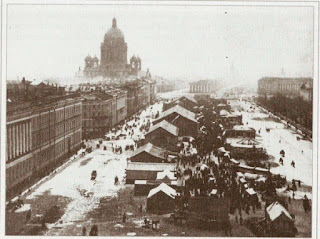 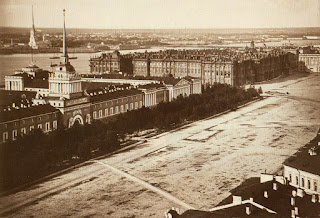 On the Tuesday, dances and dinners were held in the Winter Palace starting in the early afternoon until midnight. During the 1840s, a dance was held where the ladies sat on chairs and the gentlemen on the floor. A pair of dancers then circled and danced over the man. Nicholas I sat particularly low and when asked why, replied that once his toupee was knocked off.

Portrait (below) of Nicholas I 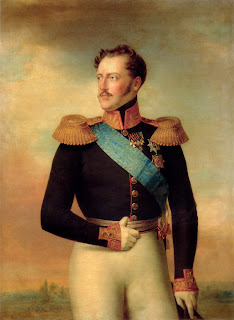 Posted by Winter Palace Research at 07:21