Ice Cream in the Winter Palace

The kitchens in the Winter Palace consisted of three main departments; cooking, wine and confectionery.

Painting (below) of a kitchen in the Winter Palace 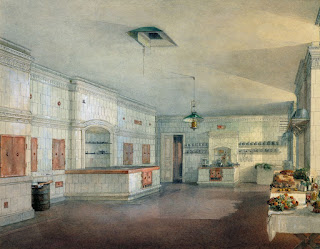 A part of the confectionery was the making of ice cream, a favorite with the family and in great demand during the imperial balls.

Painting (below) of the Imperial Ball dinner in the Winter Palace 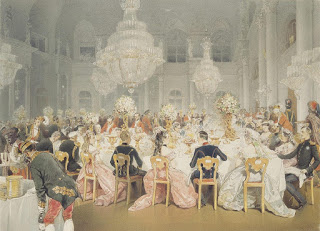 Catherine the Great’s Sevres service for sixty people included ten vases with handles in the form of a frozen fountain with sixteen bowls, twelve trays with seven bowls and eight trays with six cups for ice cream.

In the 1840s-50s, two plates of candy and two bowls of ice cream on ice were prepared daily for Empress Alexandra’s rooms.

During the Hermitage performance on February 7th 1851, thirty dishes of ice cream and sixty decanters of lemonade were placed in the theater. At the dinner later, there were two hundred and twenty plates of sweets and fifty-seven dishes of ice cream on tables for the 570 attendees.

There were occasional restrictions. In August 1848 during the cholera epidemic, Nicholas I ordered that no sturgeon, truffles or ice cream be served as a precaution.

In January 1874 during the marriage festivities of Alexander II’s daughter Marie, the confectionery department placed seven dishes of ice cream in the family rooms including the Duke of Edinburgh. Neither his reaction to the ice cream nor if it was common practice in the English court is known. 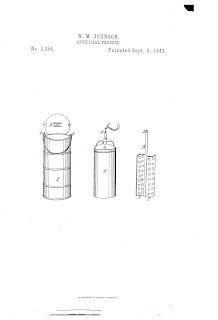 In 1853, the Dutch confectioner Meris -Meltzer’s ‘machine for easy and fast preparation of ice-cream’ was used in the palace kitchen.
Posted by Winter Palace Research at 07:55