The Amber Room and the Wine Bottle

In the 1830s and 1840s, artists from the Imperial Russian and French troupes would arrange stage performances twice a week in the Great Hall of the Catherine Palace in Tsarskoe Selo. A dinner was held after for all the performers.

F. Burdin in his ‘Memories of an Artist to Nicholas 1st ’ wrote of an incident that happened during one of the dinners in the Amber Room. Two of the actors, Goduonov and Becker, had drunk too much and started quarrelling. It reached a point where Godunov threw a bottle of wine at Becker. It missed him, hitting the wall and splintering pieces of amber. All were terribly frightened.

The Minister of the Court Prince Volkonsky and the theatre director were horrified at the thought of what would happen when the emperor learned of it. The ruined amber could not be hidden. The minister feared a reprimand, the director his resignation and the actors arrested.

A few days later Nicholas was passing by the room and, seeing the damage, asked Volkonsky what had happened. The minister nervously said the accident occurred during dinner when the actors were drinking glasses of wine. Nicholas replied ‘So, give them more water in the future’.

The minister had said he did not know if or when the amber pieces could be repaired. Was it restored? Can you spot flaws in the photos below?

Photograph (below) of the Amber Room in 1917 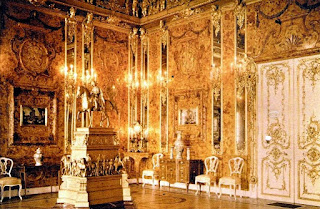 Photographs (below) of the Amber Room in 1931 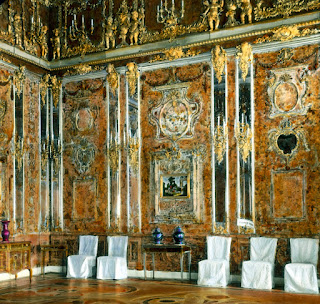 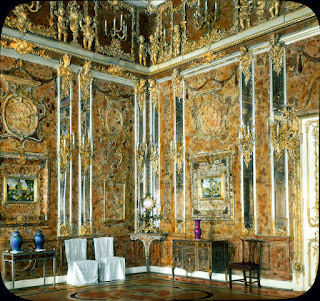 The former Empress Marie lived in her house at Hvidøre near Copenhagen after the revolution. In her diary she writes of her passion searching for amber on the beach.

On Wednesday August 20th 1919 she wrote ‘I had my coffee, went out into my lovely garden and spoke for a while with the good old gardener. Dolgorukij and Vyazemsky also went down to the shore. I showed them the neighborhood and was very proud that I found right away ten pieces of amber’ and on the following Saturday ‘I went down all by myself to the shore and found pieces of amber, which made me very happy’.

A year later on September 30th she ‘walked a little by the shore and found two pieces of amber’. The next month on Tuesday the 5th she ‘again went off for a walk down by the shore, where I found five pieces of amber which made me very proud’. 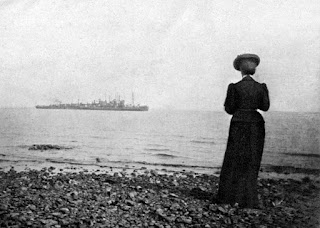 Whenever we stayed in Tsarskoe Selo, the restoration of the Amber Room was still in progress. Viewing recent photos of the walls, I felt the room heavy, closing in on one, as in the Millions Room in Schönbrunn Palace in Vienna. Then I saw the panorama below with the beautiful ceiling and tall windows. The room is magnificent! 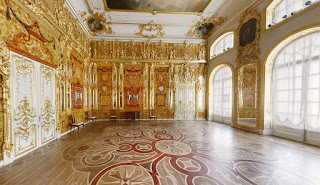 Posted by Winter Palace Research at 07:47