Cracks in the Alexander Column on Palace Square

Count Georg von Cancrin, the elderly and influential Minister of Finance, enjoyed evening walks. Crossing palace square in 1841, he noticed a vertical crack in the granite of the Alexander Column that had been erected on August 30th 1834. 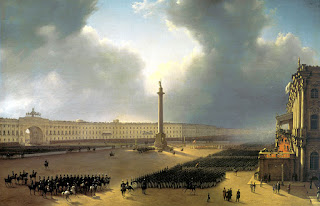 With his knowledge of mineralogy, he understood the danger of water seeping through the cracks and mixing with granite. Although stringent in controlling the state budgets, Cancrin proposed to cover the column with copper and was willing to fund the project. 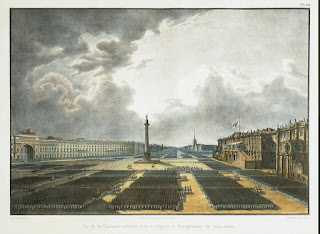 Court officials were reluctant to acknowledge that there were any defects in the recently installed monument. To avoid a scandal as the minister was respected by the Emperor Nicholas I, a committee of the original builders was formed.

They concluded ‘after a most thorough examination that the column was found to be in perfect order. Some granite crystals had crumbled and formed small rough depressions that were not glossed. These hollows appear to be cracks’. It was an ‘optical illusion’. It is unknown if Nicholas was deliberately deceived by the builders hiding the flaws with their work.

Twenty years later the problem became dire. Alexander II established another committee in1861 of experts including engineers, scientists, professors and architects to inspect the column. They agreed that ‘cracks appeared even before the column was put in place and were skillfully filled with mastic [resin from the mastic tree used as putty-like filler and sealant] that later fell out’. 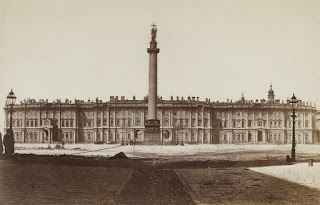 The column was repaired using a solution of Portland cement mixed with liquid glass and then polishing the surface. As it was necessary to annually inspect the column to seal up any damage, four copper chains with rings at the end were attached at the top for lifting and lowering a worker. 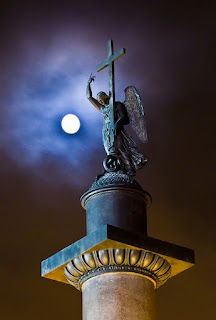 Posted by Winter Palace Research at 07:33