Fulfilling a promise to his daughter Empress Marie, King Christian IX and Queen Louise of Denmark visited Saint Petersburg in the late autumn of 1881. He worried about ‘the need to match the imperial extravagance’ writing that he ‘wished to live as close as possible to her but not in the palace’. The king, unable to justify another trip within six months, did not attend Alexander III’s coronation and sent his son Valdemar. 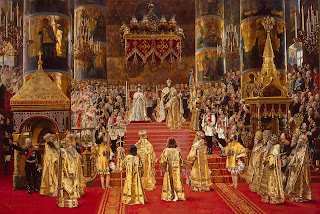 Empress Marie’s letters to her mother reveal private details surrounding the coronation ceremony on May 15th 1883. The evening of May 14th ‘all the family was in the church for a long time.  After the service, Valdemar [her brother] and I had dinner and were together until about 11:30 pm. Then we had confession with Father Yanishev. After that we went to bed. Fortunately I was able to fall asleep but poor Sasha [Alexander III] had not slept all night. We rose at 7:00 am, awakened by cannon shots that ushered in the beginning of the celebrations’.
‘At 9:00 with beating hearts and tears in our eyes we left our chambers. I wore the silver coronation dress with a long train, nothing on the head and a small pearl necklace to not feel naked. We entered the ancient Assumption Cathedral and stopped in the center on the dais before the two thrones. Valdemar stood next to me. Sasha was presented with a crown. He solemnly laid it on his head. Valdemar laid a large velvet pillow at his feet on which I had to kneel. Sasha solemnly put a little crown on my head’. 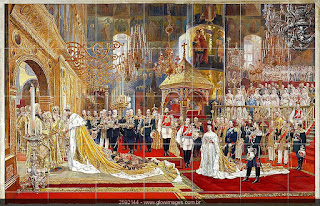 Nicholas II hung the two paintings above of his father’s coronation in his Reception Room (176) on the 2nd floor of the northwest section of the Winter Palace (below).  The Anointing of Emperor Alexander III is on the right. 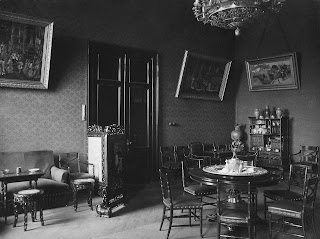 Photograph (below) of the Reception Room in November 1917 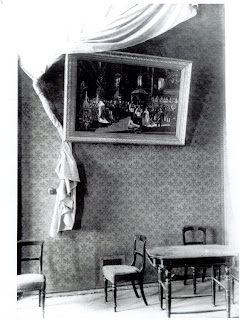 Posted by Winter Palace Research at 07:50