The Empress Lost in the Shadows

Catherine the Great wanted her fifteen year old grandson Alexander to marry. On October 31st 1792 thirteen year old Princess Louise of Baden and her younger sister Frederika arrived in Saint Petersburg. Alexander chose Louise. She took the name Elizabeth Alexeyevna during her conversion to Orthodoxy on May 9th 1793. Their wedding was held on September 28th in the Cathedral of the Winter Palace. Within three years the empress was dead. Alexander inherited the throne after the death of his father Paul in 1801. Emperor Alexander I’s reign is well-known due to the Napoleonic Wars.


Portrait by Jean-Laurent Mosnier (below) of Empress Elizabeth c1805 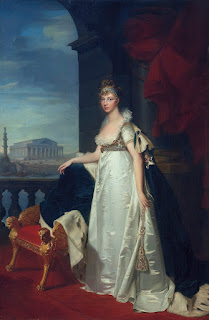 Empress Elizabeth Alexeyevna is a stranger to many readers. Her suite of rooms was on the 2nd floor in the northwest section of the Winter Palace. They were dismantled after her death in May 1826 for the new Empress Alexandra, the wife of Nicholas I.

Princess Varvara Golovina (1788-1819) wrote a memoir of her life as a lady-in-waiting to Elizabeth. She was also an artist, giving us a glimpse of Alexander I and Elizabeth’s rooms in the Winter Palace. The plan of the 2nd floor from 1801-1826 was reconstructed after the 1837. 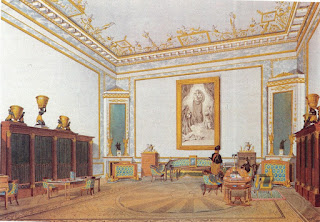 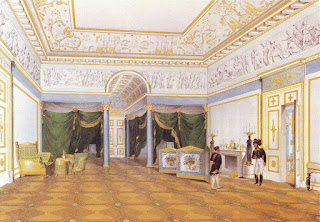 Visitors to the Hermitage today rarely recognize portraits of Empress Elizabeth, famous in her time, now hanging in the former Pompeian Gallery [#151-153] and other halls.
Posted by Winter Palace Research at 07:47