A Century of History in the Small Nicholas Palace, Moscow

Nicholas and Alexandra’s first child, a son Alexander, was born in the small Nicholas Palace in Moscow on Wednesday, April 17th 1818.

Photographs c1900s (below) of the Nicholas Palace and model 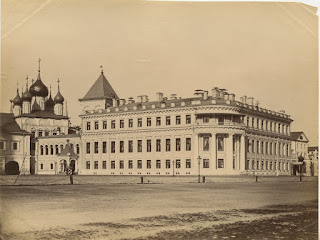 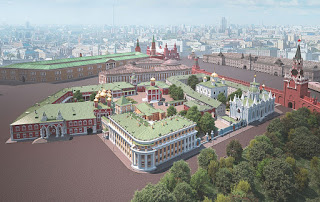 The palace, formerly the Bishop’s residence part of the Chudov Monastery in the Kremlin, was purchased as an imperial residence in 1817. A half century later Grand Duke Konstantin Nikolaevich returned with his son Konstantin. On June 11th 1879 he wrote that they ‘settled in the small Nicholas Palace. Here at every step Papa had childhood memories. After dinner he took me to Alexandria where every room reminded him of those years and his late sister Alexandra Nikolaevna with whom he was especially close. We went to the garden. Papa wanted to show me the pavilion where he ran between lessons. Professor Sergei Soloviev lives there now. We found him over the manuscript of Catherine the Great’.

Plans (below) in N. Shokin’s 1894 book ‘Historical Sketch of the Small Nikolaevsky Palace’ 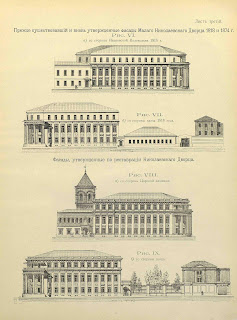 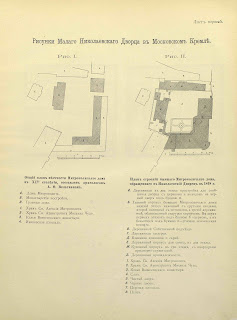 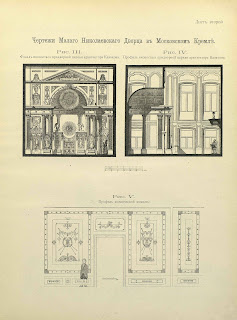 On Tuesday July 4th 1906 Queen Olga of Greece, her son Christopher, Grand Duke Konstantin Konstantinovich, his wife Elizabeth and daughter Tatiana arrived at the Nicholas Palace for the reburial of Grand Duke Sergei in the Chudov Monastery. It was the home of his widow Grand Duchess Elizabeth (Ella) and her wards Maria and Dmitry. Konstantin noted on Wednesday morning that ‘my wife and I slept in the governess E. Dzhunkovskaya’s room. In the old days it was the bedroom of my grandmother Alexandra Feodorovna’.

Watercolors c1840s (below) of Alexandra’s Study and Drawing Room 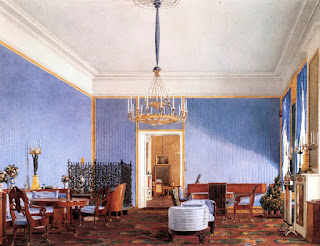 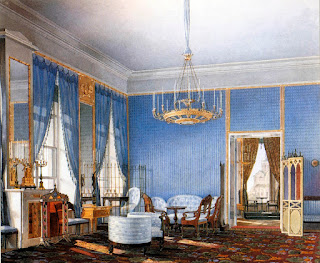 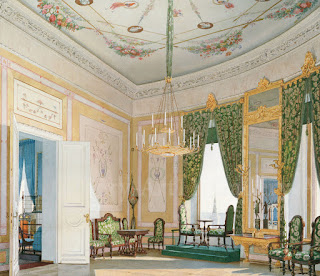 In January 1908 Ella went through a complicated operation in her convent’s infirmary. After six weeks recovery there, cared for by her sister Princess Irene, she returned to the Nicholas Palace. On March 24th her brother Grand Duke Ernest and his Eleonore of Hesse-Darmstadt arrived to stay until April 3rd. 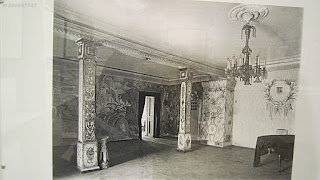 The palace was demolished in 1929.
Posted by Winter Palace Research at 06:52